Work From the Laboratories: Highlights from the October Microcirculation Issue

"Impaired neurovascular reactivity in the microvasculature of pregnant women with preeclampsia" - (Volume 24, Issue 7)

PE is associated with maternal vascular dysfunction, leading to serious cardiovascular risk both during and following pregnancy. To assess microvascular reactivity in pregnant women with PE. A cross-sectional study was performed in 36 pregnant women with PE and 36 normotensive pregnant women (C) in the third trimester. Skin microvascular blood flow was measured using LDF at rest (RF), during the maximum hyperemic response to brief arterial occlusion (MF) and during the sympathetically mediated constrictor response to deep IBH. In pregnant women with PE, RF was higher [C, 8.1 (4.6); PE, 12.0 (7.6), P<.001; PU perfusion units; median (IQR)] and MF/RF [C, 6.1 (3.7); PE, 3. 9 (4.9) P<.001] and peak CVC lower (P=.009) compared to normotensive controls. The constrictor response to IBH [C, 62.4% (27.9); PE, 33.0% (50.6), P=.008] was reduced in women with PE. In univariate analysis, MF/RF was associated with PE status (r=−.417, P=.0001), systolic (r=−.385, P=.001), and diastolic (r=−.388, P=.001) blood pressure, but not BMI (r=.077, P=.536). Women with PE are more than three times more likely to exhibit a reduced microvascular reactivity in the third trimester of pregnancy than normotensive pregnant controls. These differences may be attributable in part to an altered sympathetic neural microvascular tone in PE. 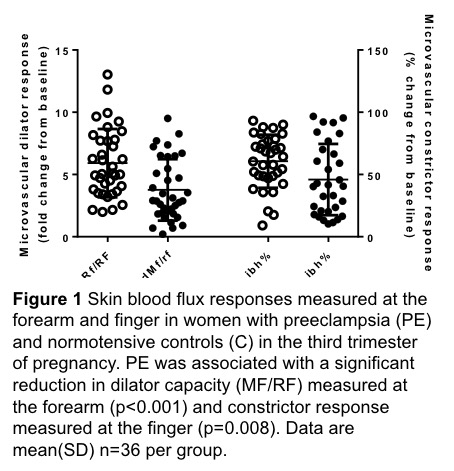 Work From the Laboratories: Highlights from the August Microcirculation Issue

To provide detailed geometric and topological descriptions of the rat gluteus maximus arteriolar network, and to measure the distribution of diameters and lengths as well as their associated variability within and between networks.Complete arteriolar networks arising from feed artery (inferior gluteal artery) to terminal branches were imaged under baseline conditions, using IVVM. Photomontages of complete networks were assembled and evaluated offline for measurements of geometry and topology. Single-line (skeletonized) tracings of the networks were made for fractal analysis. Diameters and lengths decreased with increasing topological order (centrifugal), while number of elements increased with increasing order. Horton's laws were shown to be valid within the arteriolar networks of the rat GM. Inter-network variability in diameter (~5–22%) and length (~17–30%) at each order was generally lower than the corresponding intra-network variability in diameter (~10–48%) and length (~39–106%). Data presented in this study provide crucial quantitative analysis of complete arteriolar networks within healthy skeletal muscle, and may serve as ideal experimental inputs for future theoretical studies of skeletal muscle microvascular structure and function.

Work From the Laboratories: Highlights from the April Microcirculation Issue

Abstract: With the current epidemic of obesity, a large number of patients diagnosed with cancer are overweight or obese. Importantly, this excess body weight is associated with tumor progression and poor prognosis. The mechanisms for this worse outcome, however, remain poorly understood. We review here the epidemiological evidence for the association between obesity and cancer, and discuss potential mechanisms focusing on angiogenesis and inflammation. In particular, we will discuss how the dysfunctional angiogenesis and inflammation occurring in adipose tissue in obesity may promote tumor progression, resistance to chemotherapy, and targeted therapies such as anti-angiogenic and immune therapies. Better understanding of how obesity fuels tumor progression and therapy resistance is essential to improve the current standard of care and the clinical outcome of cancer patients. To this end, we will discuss how an anti-diabetic drug such as metformin can overcome these adverse effects of obesity on the progression and treatment resistance of tumors.

Abstract: While the adipokine, adiponectin, exerts a variety of protective effects including antilipotoxic, antiapoptotic, and anti-inflammatory actions, reduced adiponectin levels are associated with endothelial dysfunction in both macro- and microvascular diseases. Recently, adipoRon, an adiponectin receptor agonist, has been shown to decrease insulin resistance and hyperglycemia in a model of Type 2 diabetes. The present studies suggest, however, that adipoRon is a potent vasodilator acting directly on smooth muscle and in a manner not consistent with adiponectin, itself.

Abstract: Obesity leads to an increased pulmonary capillary permeability. The current study suggests that impaired glucose control and subsequent increase in vascular oxidative stress play an important role to increase lung permeability. This pathological response may have implications for the clinical care of critically ill obese patients, who have increased risk of pulmonary complications.